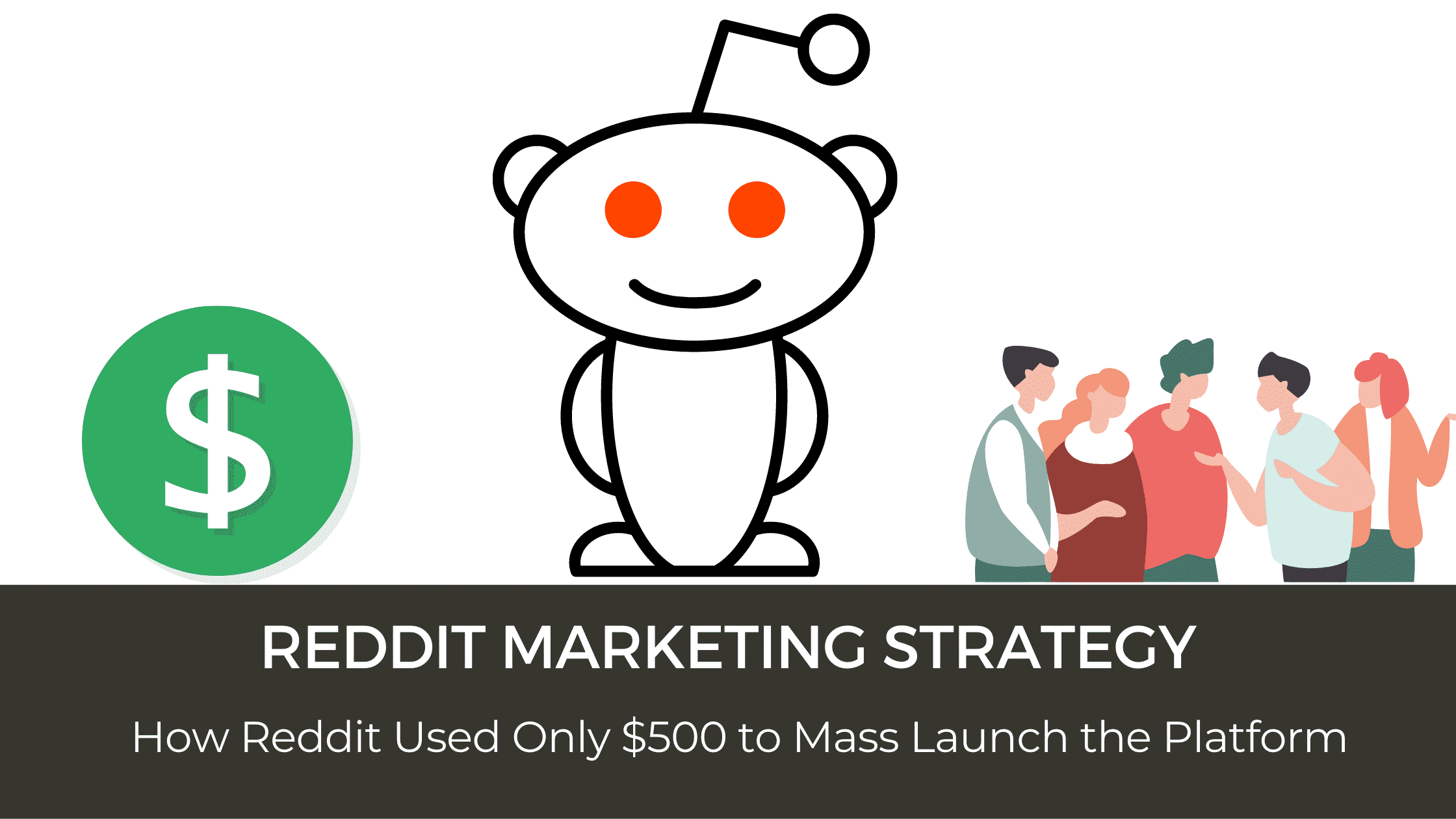 by Samit Patel
in All, Marketing, Product Launch Stories
Comments

If you’re on the Internet and don’t know Reddit, then read this piece where I’ve covered Reddit’s story in detail.

If you’re on the Internet and a marketer, a founder, an entrepreneur, then you have to know how about Reddit’s marketing strategy – building an empire with just $500 of advertising budget.

And that’s what you’ll find out in this article.

Back when Reddit launched, there was Digg, a link aggregator website enabled users to share web links and vote those links up (digg) or down (bury). Reddit was soon to become a similar site, one that would focus on user-generated content – a rare thing at the time.

So how did Reddit manage to set itself apart and stand out from the crowd? Moreover, how did it even manage to become the talk of town with a rapidly growing community base?

Here’s what they did.

Instead, at every event, the founders handed stickers. Wherever they went, they took stickers with them and pasted it on polls, signs and other advertisement boards.

Sure, it doesn’t sound like the most strategic thing to do, but it was the most effective. More effective than handing out brochures!

The stickers weren’t just any stickers.

It was the Reddit alien mascot that people found rad enough to use as tattoos!

This mascot gave people a sense of allegiance to a community. It was an identity. It wasn’t any logo, any fancy billboard advertisement, but a simple sticker of a cute lil alien character.

Instead of spending $5,000 on ads and expensive branding, use the simplest of memory retention products like a sticker, a mascot, to spread mass awareness. If your business model is dependent on a community, time to consider handing out stickers!

Build an Attachment to the Brand

Ok, I know I said having stickers were the easiest thing to do, but why would anyone flaunt a sticker if they don’t feel attached to the brand?

That’s where you’ll have to put in the work to build your community and inspire people to feel attached to the brand.

This is particularly important for crowdfunding projects where you need a community of backers to become your biggest supporters and customers.

Simply building a group and pumping it with content isn’t enough. You have to let people drive your community and build trust.

Once there’s trust and value, people start feeling attached to the brand.

It’s important to understand that you’re not putting out things to make people love you.

And that’s fine. That tattoo guy doesn’t have to love your community or your brand.

If you can treat your first 100 customers right, they will make your product.

When you get your first hundred users, treat them well, because these first hundred will make or break your product. Somewhere in this first hundred, there will be a handful of people who are actually going to drive your product, and you can’t afford to alienate any of them. Who knows which user will be the one who drives your website, the one who catapults it into something that gets 35 million unique visitors a month? If someone is going to take the time to write you a feedback email one week after you’ve launched, you had better respond to them as quickly as possible, because that’s a potential power user…”

Reddit’s marketing strategy has always been focused on making their users their most powerful asset.

Stop Talking About You

People are in your community, follow your page or in your email list because they are there for the product.

Give them what they are there for. Cute cat pics, freebies, templates….anything that makes them want to be on your platform and endorse you.

For SaaS and B2B businesses, this is of utmost importance. When you’re sending out email newsletters or writing long-winded Twitter threads, don’t tell them about what you did. Give them solutions, content, guides that can help them solve their problems. That alone builds trust and authority. Once they know you have given them credible information, they will turn to you for your service.

You could get user-generated content through community engagement on your social media groups.

You could get user-generated content through a design contest for a new logo, or design concept.

There are dozens of ways you can get user-generated content for your business, so long as you know how to capitalize on that and turn it as a driving force of your business.

For instance, your social media group could become a hotbed of opportunities and networking and could give you MQLs without you having to run any ads.

The guest blogging and content partnership will help you tap into new audience sets.

The contest can get you the best talent without having to waste resources in hiring and screening.

Now that you’ve read this insightful article, want to know how you can build a community of backers to support you project? Hit us up using the contact form below and book a no-strings-attached consultancy call!