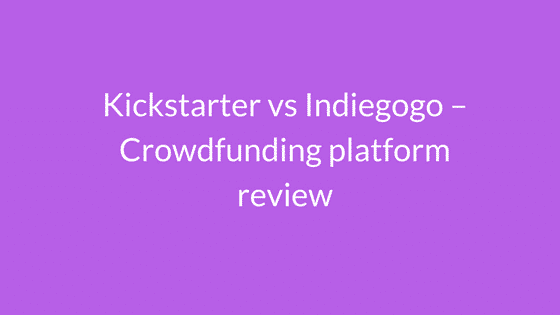 by Samit Patel
in Crowdfunding
Comments

There are hundreds of crowdfunding platforms available all over the internet. You might have heard of a few like GoFundMe and RocketHub. However, the most well known of the crowdfunding sites are Kickstarter and Indiegogo. They have the highest number of visitors and raised the most funds for a project.

A large number of people believe that all crowdfunding platforms are similar and work in the same way. That is not the case, as choosing which platform to launch can determine whether your campaign reaches its target or fails miserably.

In this article, we are going to focus on the two biggest crowdfunding platform Kickstarter vs Indiegogo.  We are going to compare the two and give you a guide on which one is better for your project and which platform is better overall.

Before we discuss Kickstarter vs Indiegogo, we are going to give you more details about Kickstarter and its pros and cons.

Kickstarter is the biggest and most known crowdfunding site in the world.  Below are some key stats and facts about Kickstarter:

The most funded categories on Kickstarter are technology, design, and games. Although there are other very popular categories like film and music.

One of the main differences between Kickstarter and other major crowdfunding platforms is that Kickstarter requires your project to reach its goals in order for you to receive funding, so for example, if you manage to 99% of your goal during your campaign, you will not receive any money.

Indiegogo used to be only focused on independent films back in 2008. However, it began accepting projects from any category since 2009.

Its main aim was to provide more opportunities to backers, Indiegogo is seen as a less strict and more flexible platform than many of the others. It is available in over 200 countries and provides more categories than Kickstarter.

It doesn’t operate the All-or-Nothing model, it has more flexibility and allows you to keep the money raised even if the project did not reach its goal.

Categories: 24: including Health, Religion, Small Business, and sport.
Visitors: 9 million a month
Fees: 4% or 9% of the amount raised

Funding: All-or-Nothing or Keep-It-all
Project duration: different durations but not more than 40 Days

Indiegogo has a success rate of around 18%.

Having looked at key features of Kickstarter and Indiegogo, Kickstarter may seem the clear winner with its higher success rate and monthly visitors is the winner. However, that is not the case for all projects. Some projects may fail to reach their goal on Kickstarter but succeed on Indiegogo.

In this part of the article we are going to explore further the topic of Kickstarter vs Indiegogo, and hopefully give you a better understand so that you choose the platform that is right for your project.

Kickstarter has the higher number of visitors of the two platforms, however, it is only available in 18 countries, while on the other hand Indiegogo is more international with availability in over 200 countries.

Meaning that if your campaign appeals to an international audience, then Kickstarter would only allow you to reach customers in 18 countries. Therefore, the winner here is Indiegogo.

Kickstarter has a success rate of around 36% while Indiegogo’s is way behind on around 18%. This indicates that Kickstarter is the real winner. However,  you have to consider that Indiegogo is open to a higher number of projects than Kickstarter. Furthermore, projects that decide to launch on Kickstarter go through more quality control than those launching on Indiegogo.

Therefore, to launch on Kickstarter, you need to have a high-quality product and experience. This will give you a 36% chance of getting funded, while inexperienced creators usually choose to launch on Indiegogo, which is one of the main reasons for their lower success rate.

Here we can give this round to Kickstarter. Launching on Kickstarter will give your project more credibility and therefore may increase your chances of getting media coverage and gaining more backers.

A video is an important part of crowdfunding as it allows you to convince people to back your product. Kickstarter comes with its own video hosting. Meaning Kickstarter will you to easily share videos and offers embeddable videos.

On the other hand, Indiegogo doesn’t have video hosting.However, it can support YouTube and Vimeo. Vimeo allows for a higher quality content, there is a fee for using the pro version. YouTube is free to use but you will have a difficult time reaching audiences because of the number of videos of available on it.

This round goes to Kickstarter. Having their own video hosting is better for project creators.

We have reached the conclusion of Kickstarter vs Indiegogo. Both have their pros and cons. It is up to the project creator to research and study to find out which platform is more suitable for their campaign.

Kickstarter is the bigger brand of the two and gets projects more press coverage. However, Indiegogo offers you the options of many categories and does not apply the All-or-Nothing funding model.